Plymouth Argyle confirm that they received an offer for captain Curtis Nelson from Barnsley but not without describing the offer as “derisory.” Newly-promoted Championship side Barnsley made the move to land the player based on his impressive performance but the club has said the player is not for sale. 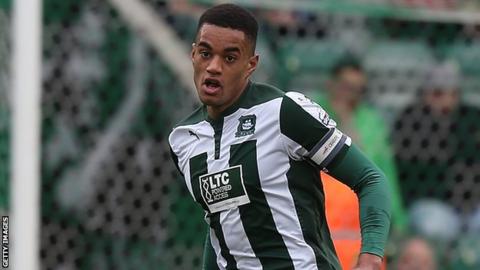 The 23-year-old centre back is out of contract at the end of the month, but has been offered a new deal to keep him at the club, according to reports.

The Devon side are entitled to compensation for the ex-Stoke trainee if he leaves the club, since he is under the age of 24. The club statement from Plymouth Argyle reads: “We can confirm that we have rejected a derisory offer from Barnsley for the player. Curtis remains under contract to us and any approach to him without our approval would be in contravention of EFL (English Football League) rules,” the club threatened.

The Championship club also confirmed the signing of Colchester midfielder George Moncur, but they refused to disclose the amount.  BBC Essex reports that the transfer fee would be in the range of £500,000. The 22-year-old had also held talks with Peterborough where personal terms were even agreed but he chose to join Barnsley. Moncur scored 14 goals in 51 games in the last campaign, but could not help them avoid relegation from League One.

Barnsley are also not shaken by the turned down bid for Curtis Nelson and are reported to have made a bid for Walsall striker Tom Bradshaw, another brutish striker who Barnsley know can cope with the physical factors in football, and help them settle into mid-table in the Championship.

The Daily Mail reports that the club prepared a bid of £450,000 after having £250,000 rejected by the League One club. Birmingham, Preston and Reading have also been linked with a move for the Wales international striker but Barnsley are keen on landing the player this summer.